So you’re definitely one of the aliens scheduled for season 4 of 2020 if you haven’t heard of the George Floyd case. A lot has been happening. A lot, yo. But we all know, deep down or on a surface level, that social media posting isn’t the only solution. So what more can we do, Céline? Well, I’m so glad you asked.

I’ve compiled a super-short list of documentaries and other media to consume to learn more about the need for the Black Lives Matter movement. Get your hot cheetos and tissues, it’s gonna be a spicy history to chew on.

When They See Us (Netflix) 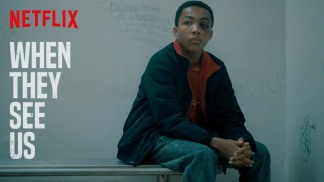 This limited series created and directed by the one and only Ava DuVernay tells the story of the Central Park Five, a group of young black boys who were wrongly accused of and incarcerated for rape.

It shows the social context that allowed for this to happen, with just stellar performances from everyone on screen (except for that snippet of Donald Schrumpf on the TV).

A phenomenal documentary by THE ONE AND ONLY AVA DU-FUCKING-VERNAY (okay I’m calm now.) A documentary that looks at how the evolution of the 13th Amendment (the ‘hey-slavery-is-over-now-or-whatever’ amendment) has resulted in the mass incarceration of today. Yo, there is so much to learn from this: the privatization of prisons, industries profiting off of punishment, the limited rights of the previously incarcerated. She also got Angela Davis, the Angela Davis for an interview. It’s available on YouTube now for free.

This limited series tells the story of Kalief Browder, a young black man who was arrested for a crime he didn’t commit, and how the justice system continuously failed him. His story deserves to be told, deserves to be heard.

Hey, I’m gonna bring Shonda Rhimes here. You don’t need much context to jump in and see how the death of an unarmed teenager caused a national conversation. It’s one of the most memorable episodes of this show, and if you want to soften your brain into thinking it’s just watching a drama with some insanely hot people, well here you are.

A Dash of Comedy, Perhaps?

Why yes, of course! I’m the comedy queen! Here are two episodes that deal specifically with the police system that targets black people.

Hasan has the charm, wit and computer screens to entertain you while telling you specifically how the world sucks this week. It’s amazing. I recommend that show for pretty much anything. But it’s important to know what people in the force are being taught, to gain a better understanding of what to fight for. Check it out!

He did a bonus episode on anti-blackness within communities of colour here It’s absolutely brilliant.

Look, it’s me. I’m gonna bring B99 into it. But honestly, this episode was a necessary inclusion in the only comedy cop show in mainstream media. (If there are others, please correct me in the comments.) It’s written by a screenwriter-crush of mine (that’s a thing, right?) Phil Augusta Jackson and has glorious performances by Terry Crews and Andre Braugher.

I hope this short list helps in continuing your education. I’ve watched and rewatched a lot of these and I think it’s important to keep these conversations going.

If you have more links, more suggestions, please post them in the comments.

Let’s get loud enough about this and change the damn world.

3 thoughts on “Continuing Education on BLM”