This is a continuation of my last post, which described the first half of my little two-week vacay back in May. This post takes place entirely in the city of Bangkok, Thailand, a city that I feel I could live in. Being there for more than a couple of days made it feel a little more like home, but the city never failed to keep us entertained.

We left Langkawi Island, heading back to the airport on Penang Island to connect to a flight to Bangkok. It was about four in the afternoon when we arrived at the Langkawi airport and found that every flight was delayed by at least an hour or more. Our flight? It was delayed to the point that there would be no way of making our flight to Bangkok. We went to the AirAsia counter, and at my request to be placed on an earlier flight (one that would have taken off two hours before, but was delayed and would be heading out in thirty minutes), the ticket counter employees were quick to change our tickets and get us to where we needed to go. We felt so incredibly lucky! Thank you, Langkawi AirAsia employees.

We landed in Penang at about the same time we would’ve on our original flight and easily made it to the terminal for our flight to Bangkok. We didn’t bother changing our Malaysian money to Thai money until we arrived in-country, as we couldn’t find too good of a rate in Penang.

Once again, we arrived on a late evening flight. Our hostel, Everyday Bangkok Hostel@Khaosan, was difficult to find as we had no internet connection, no map (P.S. for some reason there are no downloadable Google Maps for Bangkok), and were working purely from directions I screenshotted from the Hostelworld description of the hostel. Most people are better prepared than we are! Anyway, we caught a bus from the airport that cost about $2 more or less per person to where we were going. There was another backpacker on the bus, and we just got off with him. The bus attendant was absolutely no help to us, as we were trying to get off the bus near a temple (and I don’t butcher words in other languages, because I learn how to say things before traveling to another country. Only a little salty at this attendant). So, we decided to get off with the backpacker since his place was close to Khaosan road as well.

Well, wouldn’t you know it but we got lost again, and it took all of my remaining energy and willpower to figure out the rest of the way to the hostel. Long story short, after accidentally walking through the famed Khaosan Road (but not even realizing it at the time), and getting a roti to quell my hunger, we found our hostel. Note to future travelers: maybe get a map, and an international internet plan if you wish to avoid fun misadventures.

For the first couple of days, we spent more time relaxing, enjoying A/C and showers, and still resting our legs after our Penang Hill climb. We found several sweet spots (my favorite being Patonggo Cafe) as well as street vendors selling basic rice meals. It was easy to find food for under 50 baht (less than $2-3USD), not to mention getting Domino’s Pizza delivered to our hostel. Yeah, yeah, I know, who goes to Thailand for US chain food? Peace Corps Volunteers. Sue us.

During these first few days, we also found out about the public canal boat transportation system. So cool! You can get directions for it on the Rome2Rio app and website. It is 9 baht to ride (about 25 cents or so) and is much faster and convenient than taking tuk tuks around town. It is also a great and cheap way to see more of the city, spanning from the old town to the new metropolis. We used the boats to get to the MBK shopping center, which is grouped up with some of the most futuristic looking malls I have ever seen. It felt so otherworldly to be surrounded by bigtime commercialism again, and we loved being surrounded by that sort of abundance for a little bit.

We also went and walked around the big name tourist spots of the city, like The Golden Mount, Giant Swing, Wat Pho, and other places. We were personally overwhelmed with the tourists and the people who prey on tourists, as we aren’t used to such things. Plus, there wasn’t any good, cheap food causing us to be quite hangry and tired. Everything costs money, and in the end, we just called it a day and went back to the hostel to rest. Plus, the 7/11 on every corner sold giant cold beers for reasonable prices, and a giant cold beer after a long day is always good. 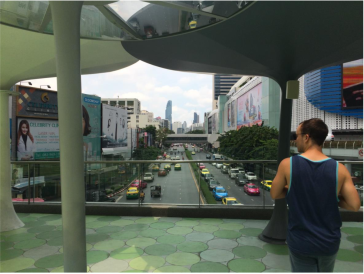 This is probably my favorite part of the vacation, besides the whole travel and seeing new things bits… we got to meet up with Sophie and her brother, Felix! It was so exciting seeing one of my best friends (who also writes for the blog), and being able to hang out after a long time apart. We spent these days eating at some delicious and affordable restaurants, namely The Sixth 6th, which was their pick, and a great one, too! They also taught us a great card game called Shithead, and I can now say I like to play cards because of it.

We were able to visit the Wat Pho temple together, which is one of the temples with an entrance fee that is worth seeing for its incredible architecture. I’m really glad we decided to spend the money on this one. Here are some photos that can speak for themselves: For our last day, we decided to take the public river boat down to the other side of town, where there was some shopping I wanted to do. It was a lot more peaceful than the diesel-fueled, loud canal boats, and a good way to see the city from the river. We left from the Phra Arthit Pier and went all the way down to the Oriental Pier, returning later from the Sathon Fang Pha Nakhon Pier. The area felt more like a financial district, and had many jewelry and silver shops. While there, we found a supermarket and stocked up on tons of spices to bring home to Timor. We also had some great Indian food, though no Indian food in Bangkok could beat what we tasted in Malaysia. We returned to the airport on the same bus we left it in, and made our way back to Dili, Timor-Leste, excited to be in a familiar place again, and happy to have new stories to tell.

That’s all! Hope you enjoyed reading out our adventures and that they help you plan your trip for the future.