Curated by and for badass women

Today I am talking about the second part of my trip in South East Asia (SEA) covering Thailand and Malaysia. If you missed part one check it out here.

After leaving Hoi An, we made our way over to Bangkok, Thailand. As a note, we flew between every destination in Asia for speed and ease. Every flight was on Air Asia except within Vietnam when we flew Jet Star. Honestly all the discount airlines we flew in this part of the world were fine, and generally not that strict on the bag restrictions, which I find tends to be the case with backpacks generally.

We were only in Bangkok for a grand total of 48 hours. The reason we went to Bangkok at all was to see the fabulous Marta (who also writes for the blog!). In hindsight, we wish we had spent more time in Bangkok (and skipped Penang, see below).

In Bangkok, we stayed at the Niras Bankoc Cultural Hostel, which my brother actually found for us. If you’re interested in learning more about how we choose hostels check this post. Overall, I gave it a 9.1/10 on Hostelworld. It had free breakfast, nice decor, and close to all the attractions. However, it was not close to great food, so you’d have to decide what is most important to you (and for us it’s food!).

Upon arrival we went out with Marta and Shaun to acquire some tasty food. We ended up at Mai Kaidee, a restaurant serving vegetarian Thai food. We were all in agreement that it was a solid meal but nothing out of this world. I’d recommend it for an easy and quick vegetarian meal in Bangkok.

We went to a cafe called Patonggo Cafe twice while in Bangkok because it was close to Marta and Shaun’s hostel. They have some snacks, ice cream, and drinks. The coffee all over SEA is super sweet but their ice cream was tasty and it was a nice play to hang out and play cards.

The real star of the show however was The Sixth 6th. It’s a restaurant near one of the main temples in Bangkok so we stopped there after visiting it. It was about $15USD for all four of us and we all had ridiculously good meals. I had the vegetarian fried rice and it was debatably life changing.

Other than eating, we really didn’t do that much while in Bangkok. We went to one of the main malls in the city and bought some fun clothes, specifically, the classic elephant pants/shirt. In addition, we visited The Temple of the Emerald Buddha (Wat Phra Kaew). It was really beautiful and we truly enjoyed our time there. I would recommend visiting temples whilst in Bangkok, they’re really something special. However, you do need to be fully covered (pants and shoulders covered) which was pretty tough in the heat. 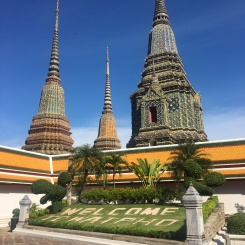 Honestly, Penang was me and my brother’s least favorite place we went. We found there wasn’t much to do, the food was just OK, and our Airbnb was absolutely terrible. Marta and Shaun enjoyed it far more than us however so do look out for their post.

The first thing we did upon arrival was go get some food. We went to a place called Yeap Noodles because it was close by and had vegetarian options. If you’re vegetarian, I suggest going elsewhere as the food was pretty bland. However, if you like spicy food this is the place for you. My brother got the spiciest noodle dish on the menu, after being unsatisfied with the level of spice everywhere else we had been. He was not disappointed. His meal was so spicy that my mouth hurt from sharing a water bottle and we smelled it from the kitchen. If you feel like torturing someone, I highly recommend.

For our breakfasts, we decided to go with Western style breakfasts. Partially because we’re lame, but also partially because sometimes you need some normalcy. We enjoyed Coffee and Friends, and ended up eating there twice. It wasn’t super cheap, but still reasonable, and we enjoyed it. We also went to Shia’s Granola one morning for some smoothie bowls. I personally drink a smoothie everyday and always really miss it while I am travelling so that was much needed for me.

The two places we enjoyed most for lunch and dinner were Woodlands Vegetarian Restaurant and Tofu Village. Woodlands Vegetarian Restaurant is Indian food and it was amazing. I’m not really a huge fan of Indian food, but even I could agree it was amazing. In addition, it was super cheap! Tofu Village we went to sort of as a joke because of the name (and good reviews). It’s actually not a vegetarian restaurant but has veggie options. It was really good and the waitstaff were amazingly responsive. We were only sad we discovered it on our last day.

Our favorite place in Penang, however, was a cafe called Coffee Lane. Felix, a coffee lover, is the one who found it. We went everyday, at least once, if not twice, a day. Felix got a coffee drink called the snow black, which, to this day, we do not know what it is. I enjoyed different sorts of iced teas each day. The owner came to recognize us and was extremely friendly and chatty. Highly recommend checking this spot out!

Unfortunately, we did not get to do much else as I was having trouble with skin rashes (woohoo) and being out in the heat. We did visit an ancient house museum, but overall we were not super impressed. It was called Pinang Peranakan Mansion, and I think it would be fun if you’re visual, but I’m not so it lacked the other aspects of your usual museum. 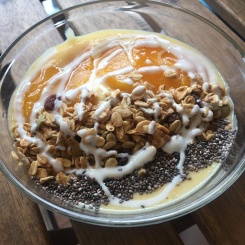 Our final destination in SEA was Kuala Lumpur. We both really enjoyed this city’s mix of the western world and it’s Asian culture. Here we stayed at the Sunshine Bedz hostel. It was fine, nothing special and nothing terrible about it. It had free breakfast but it was just toast so we skipped out on that to get actual nutrients into our bodies.

Our favorite breakfast spot was A Toast, which is a spot with huge and delicious sandwiches. We went a second time but they were out of everything! It was very upsetting, so to avoid that I recommend going for breakfast, not lunch.

We also went to Feeka Coffee Roasters. It was close to our hostel and tasty so we went twice, but it wasn’t cheap by any means and was really just easy more than anything.

When it came to lunch and dinner, we were consistent. We found this place called Blue Boy Vegetarian Food Center and then proceeded to go there 3 or 4 times. It’s basically a cafeteria but all operated by the same owner with a ton of different vegetarian Malay street food options. Some people left reviews saying the owner was terrible, but we had no trouble with him and he always recognized us.

In addition, we loved Tg’s which is an Indian food restaurant with both buffets and a la carte options. Once again, I loved the food here. Super cheap and super filling! Also, one of the waitstaff members was incredibly helpful and attentive. Highly recommend it!

We also visited Chatime to get some delicious bubble tea. Is it the exact same bubble tea you can get anywhere? Yeah. Was it cheaper and just as delicious? Also yes! In addition, to Felix’s amazement they had coffee with bubbles.

With our free time in Kuala Lumpur we spent a lot of time walking around and exploring. However the three main activities we did were the Federal Reserve Museum, the Batu Caves and the Petronas Towers. The museum was actually really cool, but that is coming from a finance major and a statistics majors, so take it as you will. However, it was free and nicely air conditioned so might be a good option even if you’re not deeply into finance. The Batu Caves were pretty cool, with a giant gold sculpture outside. Inside the caves were very pretty, but we did not spend that long there. There’s a ton of monkeys there which freaks me out but a lot of people seemed to like. Note on the caves, you need to be fully covered and climb a lot of stairs which is just pure fun in the extreme heat! The Petronas towers was our “splurge” activity in Kuala Lumpur. We were lucky enough to have almost no rain while in SEA during the rainy season. However, that luck ran out at the towers! It dumped rain for the hour we were there and basically no other time. We couldn’t even see 10 feet out the windows. C’est la vie! I think it would likely be really fun if you are able to book a day without rain. 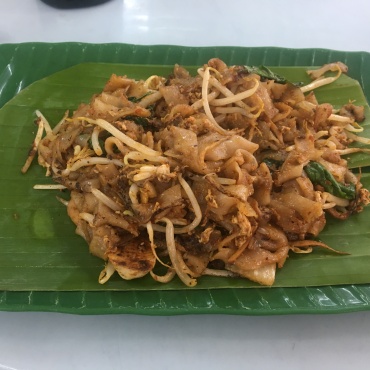 The final thing I wanted to discuss is Grab. Grab is basically the SEA equivalent of Uber or Lyft (after Uber left the area they’re the only option). We used it to get absolutely everywhere. A ride was never more than $3USD so it was cheap and convenient. Not as easy an app as Uber, but I would highly recommend it. Also, I was able to use Grab everywhere but Vietnam because I have t-Mobile which lets me use my plan in most countries. Only been with them for 5 months but overall highly recommend checking them out.