You’re living under a bigger rock than I am if you haven’t heard of ‘Crazy Rich Asians.’ Fortunately and unfortunately, IT’S A CULTURAL PHENOMENON! Fortunately, because it’s an all-Asian cast. Unfortunately, because a universal story centered around people who are not white should not be such a revolution. But hey, we’re getting there with diversity!

1. It gives you everything you want in a Rom-Com (and more)

What makes a good rom-com? Likable protagonists who truly love each other, a comic relief, an adventure aspect filled with twists and turns, and a heart-warming resolution. At least, for me. This film follows that formula, yes, but it also gives us the “RICH” and “ASIAN” aspect.

The film follows Nick Young (played by Henry Golding) and his girlfriend Rachel Chu (played by Constance Wu), who he invites home to Singapore for his best friend’s wedding. This also serves as an opportunity for her to meet the family. Unbeknownst to Rachel, her charming boyfriend comes from a family that’s, uh, crazy-rich and is the wanted-by-all-women heir to the family fortune.

So we have a Monster-in-Law-esque mother, a Pretty Woman shopping spree, an adventure across the globe to the beautiful Singapore, AND all of the abundance-porn anyone could ever need. Most distinguishable, is that it has storytelling from a perspective most of us have never seen.

Yo. Everybody in this cast is ridiculously beautiful. I cannot dzeal. Obviously, our main guy Nick Young uh…looks like this:

But also, look at all these bad bitches! 😍 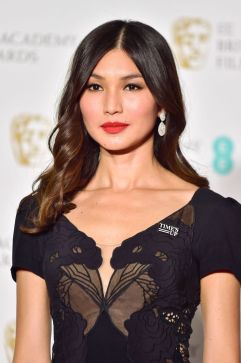 Ok, I am doing my best not to put any spoilers, but that wedding scene (Nick’s best friend’s wedding) is possibly the highlight of the movie. It is everything. I got glossy-eyed the first time, but the second time since I was alone I just went ham on the tears. Like who cares? Lemme be a sap on my own! Genuinely. The music, the shots, the acting, the set design. Dear lord, just amazing filmmaking.

4. To Throw More Money at Diversity in Hollywood

Kevin Kwan, the author of the book upon which this film is based, stated that his intention was to “introduce a contemporary Asia to a North American audience.” And this is exactly what he, and the filmmakers of the adaptation, achieved. (Also apparently it’s loosely based on his childhood??? I want to know more about this glamorous childhood????)

This year has shown that diversity is profitable. Represent groups in good-ass movies, and you’ll make money. And since capitalism drives this industry, I intend to use that to contribute to positive change. (If you like podcasts, I discuss it on mine in this episode here.)

If nothing else, go watch it because it’s genuinely a pleasant movie. In the era of Horror and Action, a good ol’ Rom-Com will be a wonderful break to the cycle.

Have a good weekend! 🌸

1 thought on “‘Crazy Rich Asians:’ So Nice I Had to See it Twice”