Friday, January 20th , I woke up feeling lethargic and depressed, and let’s be honest, it was because of the inauguration. It was gray outside and raining heavily and it seemed to me that the weather was a reflection of my inner being. I somehow managed to workout, meditate and shower that day, but then spent the rest of the day glued to the couch being depressed and watching A Series of Unfortunate Events on Netflix (which is a great show) ironically. It didn’t seem like anything could get me out of my mood, not food, singing, or dancing; nothing I did really worked, it was just one of those days.

That night, my mother and I were speaking about the plans we had for the next day and she mentioned the Women’s March. She had been mentioning it for a while, and I had heard my classmates speaking about it for a few days, but that night I made a promise to myself that I would go. I wasn’t going to let this funk I was in keep from doing things that really matter.

When I woke up on Saturday, I felt so much better. The sun was shining through my window and I just had a feeling that the day was going to be something really amazing. My mom and I headed out to the march around 11, and it was clear early on that the city of LA was ready for this to go down. As we approached Downtown Los Angeles, the traffic was terrible and the sidewalks were crowded with protesters of all ages, races and genders with signs making their way to Pershing Square. We found a parking spot, got out of the car, and followed the crowds of people to the march. As we approached the crowd, the sound of drumming and chanting from the crowd became clearer and clearer. Even from outside of the main crowd, the energy coming from everyone was palpable. There was an electric energy that seemed to move through every single one of us in the crowd.

Once I was fully aware of the amount of people who had shown up to give their support, I was so overwhelmed gratitude for where we are, and hope for where we are going. We had all come together for a purpose and an agreed vision about what this country is truly about and how we want to leave it for future generations. Being in the crowd, and seeing the amount of people who had come out to support women’s rights, LGBTQ rights, environmental justice, religious freedom, and racial equality made me so proud to be an American.

After the election, I had a hard time defining what being an American meant to me. I had never really been faced with that question before, but I found that it was something I could not avoid any longer. I grew up thinking that America was this magical place where everyone was free and welcome to be themselves. I thought that the issues that had plagued earlier generations and halted our growth as a society had already been dealt with. But that image for me was shattered, and what I saw instead was an ugly daunting task ahead. Going to this rally gave me the strength and the passion to continue on this journey for peace and equality. 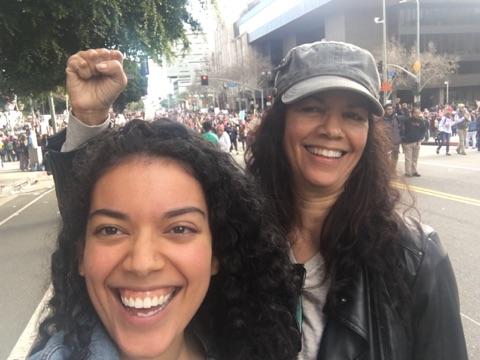 There is no denying that there is a lot of work ahead for us, because as this election revealed, there is still so much hate and fear of the unknown in this country. But this shouldn’t discourage us, because everything that is worth having, is worth working for. Despite what the media might tell you, there is still so much good that is alive and well in the world. It’s important that the people who are committed to making positive changes in this country keep their spirits high and their skin thick. I, for one, am in this for the long haul no matter the obstacle. I extremely thankful for the insight I gained from the Women’s March; it was the saving grace I didn’t know I needed.

I had spent the last three weeks in DC taking a vacation when the day I had been dreading came about: the Presidential Inauguration. The last few months, I have tried to hold out hope that really things weren’t so bad. Maybe, just maybe, the new President would prove all the raging liberals wrong and show that he is kind and open to others and their thoughts. I’ve spent years working toward equality in the States and internationally, and to watch all of my work, and the work of many others, being threatened was something that I did not know if I could handle.

I went to the inauguration with my significant other. The night before I was actually kind of excited–here I was, in the middle of DC, about to watch a presidential inauguration. I wanted to get a feel for it, and find some sort of hope amidst it all. We took the Metro downtown, all the while crowds of Midwesterners southerners that were once my neighbors grew. Security was high, and the weather dismal. It rains a lot in DC, but the clouds loomed rather than let themselves pour. Still, I tried to keep up hope.

The closer we got to the center of it all, right on the lawn of the National Mall, the more sparse crowds got. The more I looked around, the more signs I began to see, and one in particular had me lost: “EVERY REAL MUSLIM IS A JIHADIST”. I couldn’t believe my eyes! How could anyone carry that around and be proud? How could anyone perpetuate racist messages and hate like that? Trump supporters jeered at protesters who were left outside the gate. There was a vibe of shallow pride and delight, a sense of “Hah, we beat you all down to the ground. We are the powerful ones in this land.”

The ceremony took place. The supporters were overjoyed at the whole affair, feeling a sort of power that perhaps had been taken from them along the way. But Trump’s speech was absurd. And the crowd cheered at every point made that involved putting America first, and refusing to help anyone else. The crowd howled when he made promises to ‘take out the terrorists’, and ensure that once again, America is more powerful than any other country in the world. It was at that point that I broke, and walked away from it all. I couldn’t take one more second of progress being shot down left and right.

The next day, however, brought a promise of hope. Some friends and I trekked down the National mall once more, only this time to fight for peace. I was nervous and excited; I have never been part of something so big! This time, as we made our way through the Metro system, we were surrounded my smiling faces and way too many pink hats. The Metro was literally unable to keep up with the amount of people trying to board the trains! At every stop, we were delayed, trying to fit everyone from the platform onto the train car. I couldn’t stop laughing at it all.

When we finally made it to the rally, signs in hand and excitement in the air, it was incredible. From 10am to 2:30pm, we stood among the crowds and heard a whole array of speakers at the rally preceding the march itself. The women (and men!) who spoke came from all sorts of backgrounds and every color there is. There was Madonna, Michael Moore, Donna Hylton, Ashley Judd (who performed an amazing poem), Sophie Cruz, America Ferrera, and so many more incredible people speaking on behalf of the silent.

I had never felt so empowered, hopeful, and joyful in one place. I had never felt so motivated to keep on fighting for what is right. It felt like true democracy; we are the people, and we have something to say. The speakers sang for us (thank you, Alicia Keys!), and rapped for us (Ashley Judd), and more importantly reminded me of problems our society has yet to deal with. What struck me most was when a Muslim woman spoke, and explained how hard life here has been since the 9/11 attacks, and what it really means for her with Trump as president.

The world glowed that Saturday. The people showed a solidarity I think the American people have been missing for a while. The last election took a lot of the wind from my sails, and has made many fear just being alive. As a person of mixed decent, with a mother who immigrated here, this was the first day I truly began to understand what it means to be American. Americans are loud and boisterous and sometimes crazy (the whole world knows it), but that is our greatest strength. We are not afraid of speaking our minds to the leader of our entire country. We are not afraid of the repercussions of taking an unpopular stance on a sensitive issue. And we never stop fighting for what we believe in.